Of course this is news to me, unless you count the pens I pick up at iDate on the displays.  Do they count?

So here’s what happened.  Someone joined our site spouting all kinds of rubbish about various dating sites.  Some investigation led us to the conclusion that he was either someone angry after being scammed, with an axe to grind with anyone related to dating sites and completely unwilling to listen to reason, or one site trying to badmouth others by creating a fake identity.  Either way, we don’t care.  That kind of person is not welcome on our site.  They come back with several other accounts, which are all also banned.  Next up they decide to start adding comments to our YouTube videos.  They get removed.  Today he decides to have another go.  Here’s what’s been written today about us.  Click on the image for a larger version.  After it I’ll copy the reply I made. 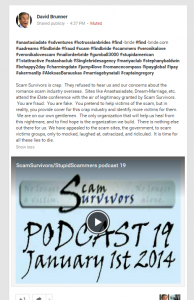 +David Brunner Seeing as you want to do this in a public forum, let’s go for it. We read your posts on our site. We read them and decided that your viewpoint is so “out there” that you’re not welcome on our site. We also saw your posts elsewhere where you were referring to the women on dating site profiles as “prostitutes”, which was the final straw for us. Your comments above pretty much prove our point. We pride ourselves in being independent of the dating site industry, even going as far as to refuse every offer of sponsorship so we can remain so. If there’s a scammer on a dating site, not only do we give the details of the scammer, but we name the site they were found on – no exceptions. We work with the authorities toward getting scammers arrested. We do all this for no money. Every person on the site is a volunteer. We get scammer bank accounts frozen, fake sites closed and their details exposed for the world to see. Again, we do this for free. When at iDate, we give presentations on how to help keep the people on dating sites safer and aware of scammers. We’re not there to help the site owners, but to protect the people who go to their sites from being scammed. We also tell the site owners that if a scammer is found on their site, we will and do name them. That’s hardly winning us any popularity contests, but we do it anyway. Maybe you’d like to explain to me how our presence there can have such an influence that dating sites obtain legitimacy from it. I can only dream of such power. So now let’s jump back to your first sentence. “Scam survivors is crap”. Really? Maybe you’d like to tell this to the tens of thousands of people we’ve helped. To the people we have had to talk to whilst they were holding a gun in their hand ready to end their own life. Am I exaggerating for effect here? Not one bit. What about the people who told us they had no one else they could talk to about their scam? The ones we have spent hours with talking them through what they need to do after being scammed or the ones we’ve helped retrieve their money before the scammer collected it and it was gone forever. Do they think we’re crap too? Of course not. You’re just angry that we wouldn’t give you a platform to spout your drivel. You are not welcome on our site and you never will be.

Next up I find more comments made by him, and this is the one I really need to address. 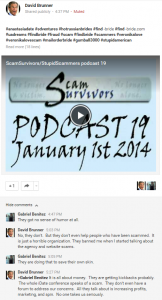 It’s worth pointing out why we don’t deal with sites, but rather individual scammers.  We’re four people.  There’s barely enough time in the day to do what we do already.  It’s the same reason we don’t deal with “real life” scams, just online ones.

So at this point we’re being accused of taking kickbacks.  I don’t know whether to find that more insulting, or being accused of having no sense of humor.  It’s a tough choice between the two, but the kickback thing slightly edges it.  So let’s talk about the kickbacks thing shall we?  No dating site EVER has given us a kickback.  Once, on another site I was running at the time, I was offered a kickback if we changed the bad reviews of a dating site to something more positive.  They were greeted with a less than polite “take your money and shove it where the sun don’t shine!” response from me which is documented in one of my books.  Even the threat of legal action they made later on to try to get us to change it didn’t make me bend, and the same stance holds firm on ScamSurvivors.  We offer – as the site’s front page says – “Free, non judgmental help and advice for those scammed online”.  Maybe I now need to add “independent and 100% kickback free”!